Leader in the renewable energy sector

Our commitment to innovation and new technologies has made us a leader in the renewable energy sector. Ongoing projects include repowering, energy storage plants, floating offshore wind farms and power plants that seek synergies between solar PV and wind energy. Because at EDPR, we believe that a sustainable future starts with our choices today.

Just like oil or gas, wind energy came into prominence onshore. Later, it moved out to sea, starting in shallow water and them making steps into deeper waters.

One of the EDPR's most exciting projects is WindFloat Atlantic, which is the continental Europe's first floating wind farm.
Located approximately 20 km off the coast of Viana do Castelo, where the waters reach a depth of 100 meters, WindFloat Atlantic (WFA) is under construction. It is first next-generation offshore wind farm in continental Europe. 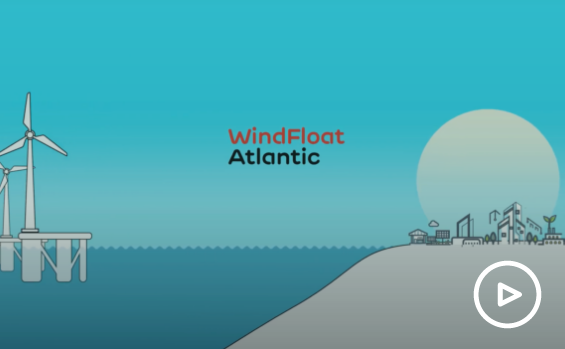 WindFloat Atlantic - Energy beyond the horizon 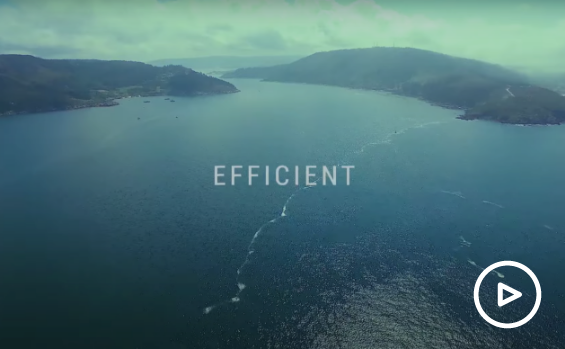 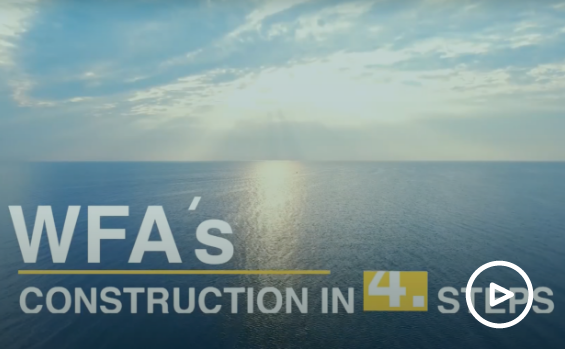 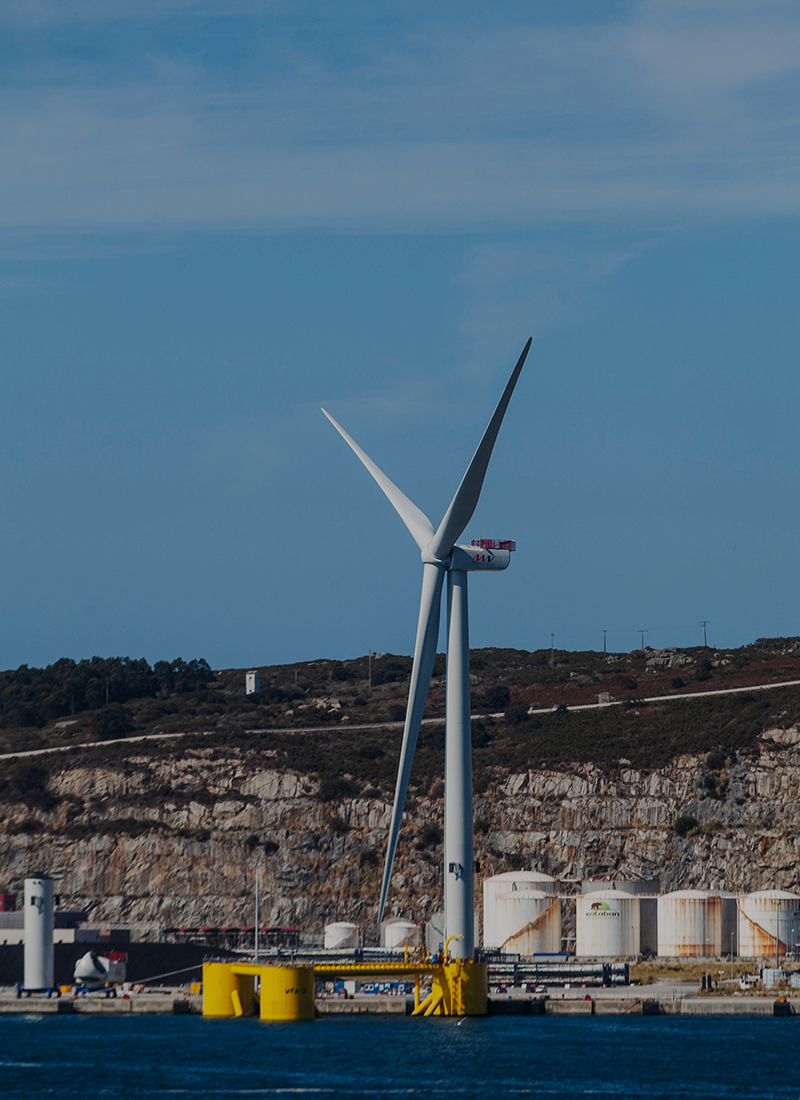 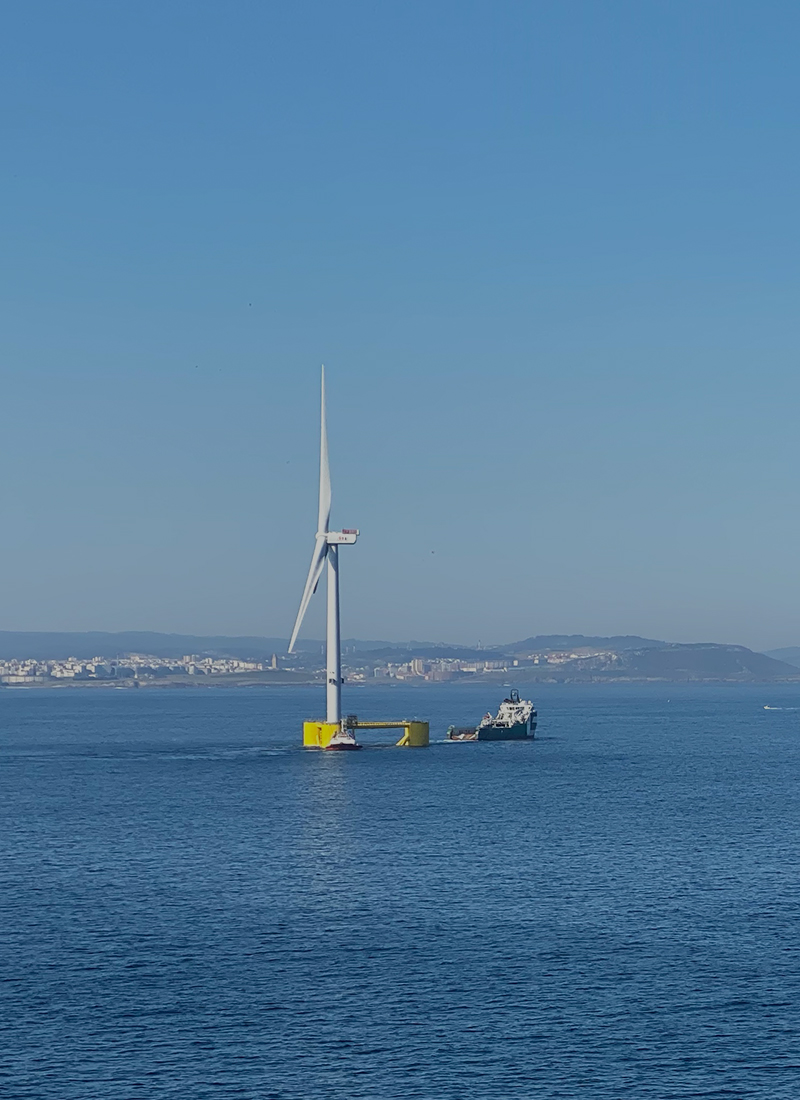 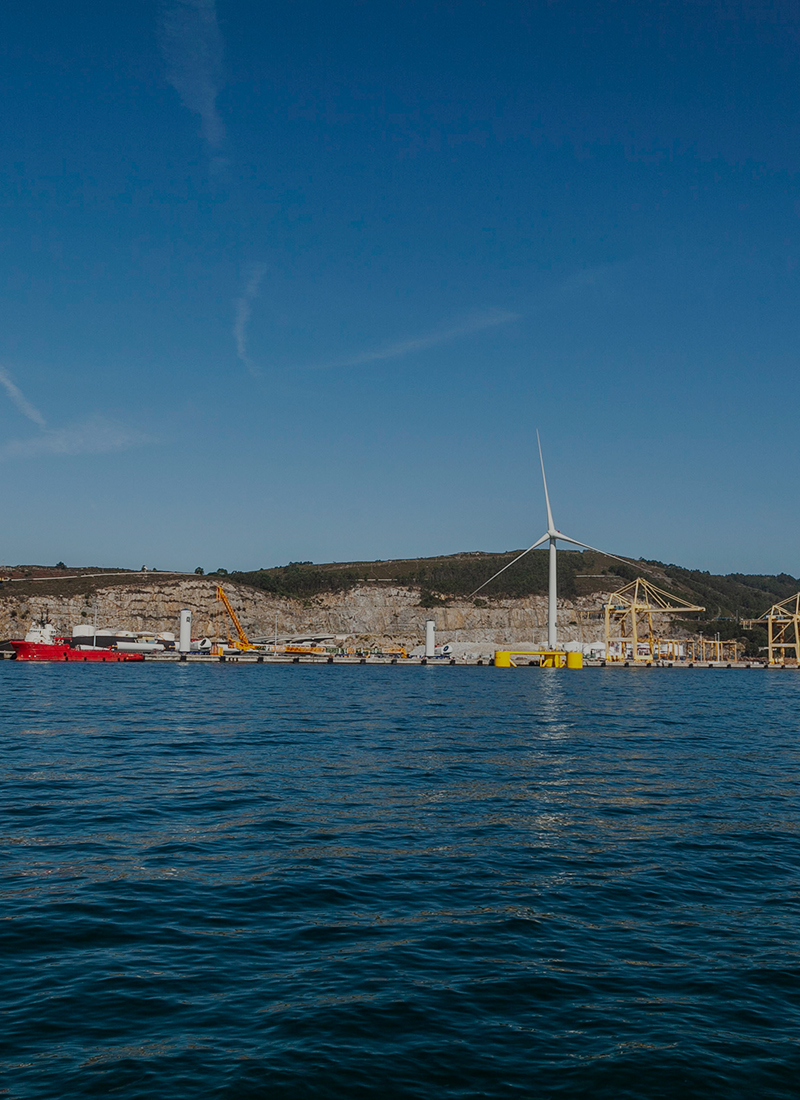 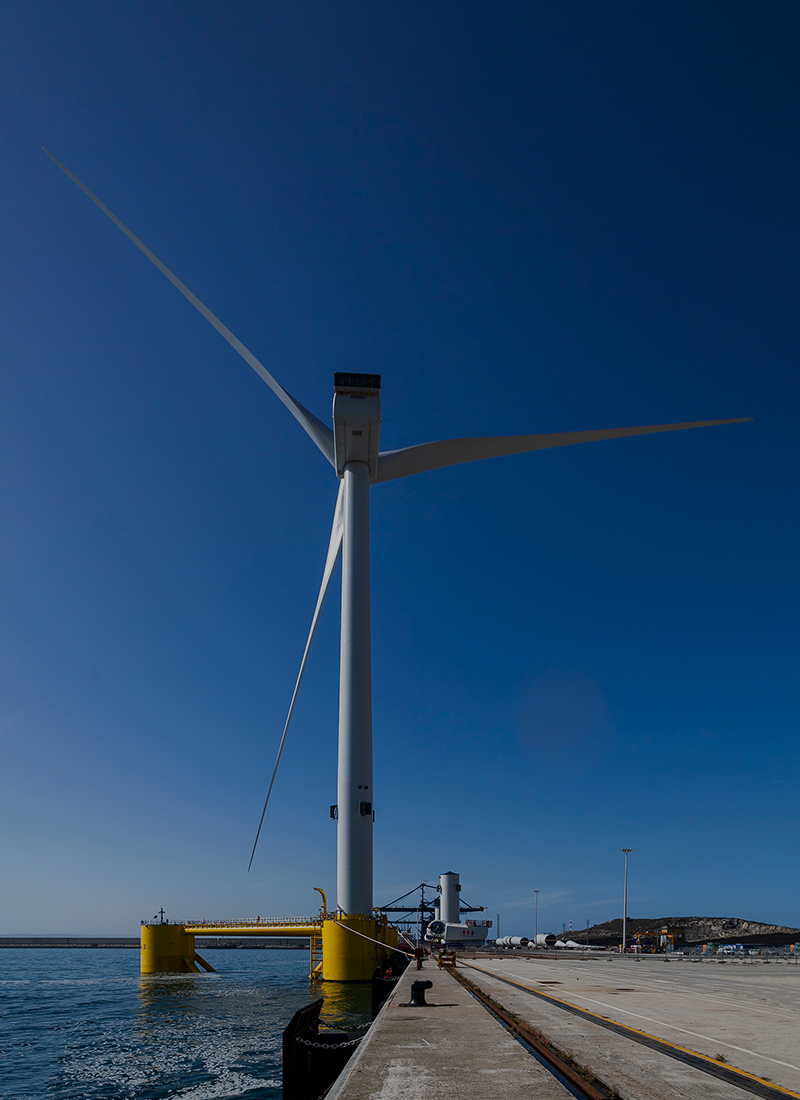 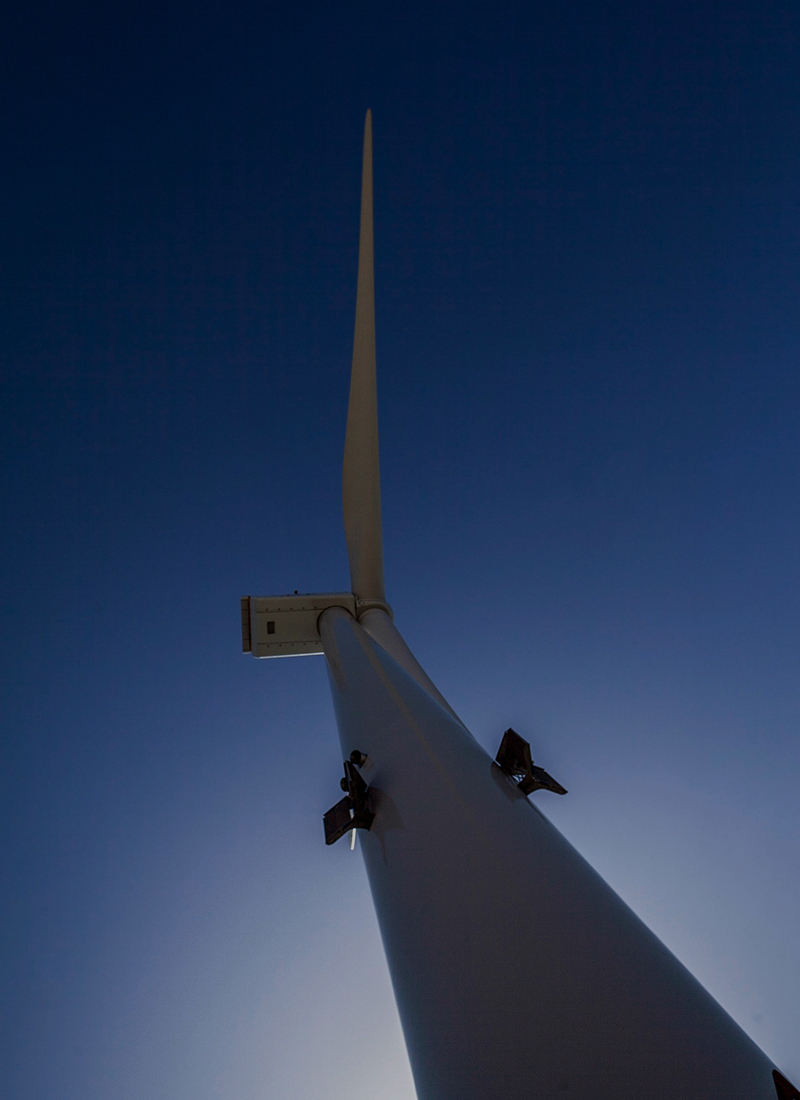 Structure designed to be anchored at a depth of more than 100 m.

Capable of withstanding waves more than 17 meters high and winds of more than 60 knots.

Total capacity of 25 MW (the consumption of approximately 60,000 households).

This project is backed by the success of the WindFloat 1 prototype. Operational between 2011 and 2016, this 2 MW prototype managed to continuously generate power for five years and withstand extreme climactic conditions without suffering any damage—including waves of up to 17 m high and winds of 60 km.

WFA has two unique features that set it apart from traditional offshore windfarms:

Each wind turbine operates on a WindFloat floating platform, which is connected to the seabed via chains—ensuring its stability. This eliminates the complex offshore operations associated with installing traditional fixed structures, reducing their potential environmental impact.

The construction and assembly of the platform/wind turbine pair is completely carried out on land, and later towed out to its final location..

These two features make the involvement of large transportation and installation ships unnecessary, eliminating complex and costly operations at sea. In addition, they make it possible to set up wind turbines farther from the coast, where the seafloor is deeper and wind speeds are stronger and more regular.

The average lifespan of a wind turbine is 20 years. At 15 years, wind turbines need to be assessed for safety and the future of the turbine must be determined. At this point, EDPR may consider full repowering as a solution to be accomplished. Full repowering means reducing the overall number of wind turbines and replacing them with more efficient machines which results in a net increase of power generated. Properly managing wind turbines at the end of its life from a sustainable point of view, is crucial to maximize the environmental positive impacts of wind energy from a life cycle approach. 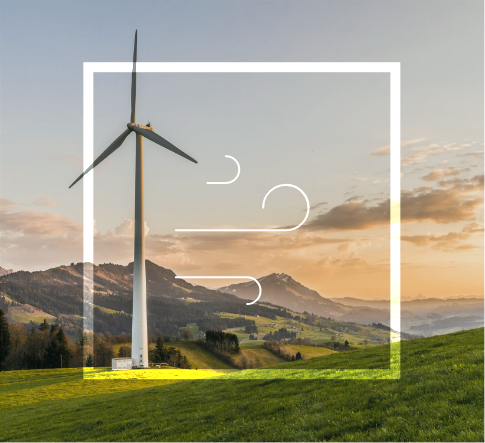 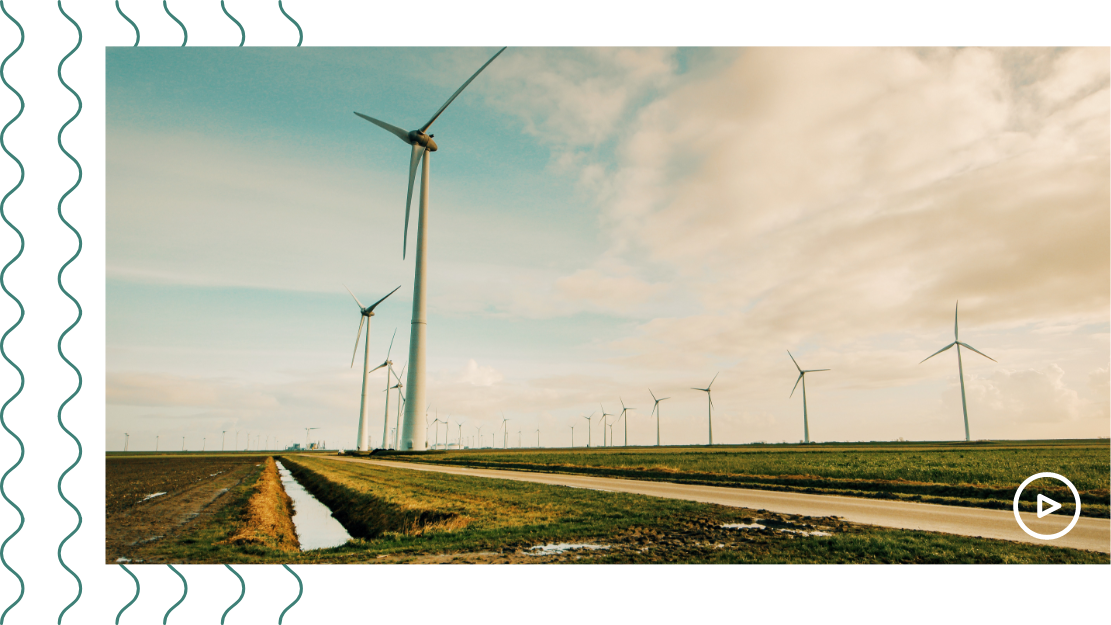 Reduction in land area per MW of wind farm 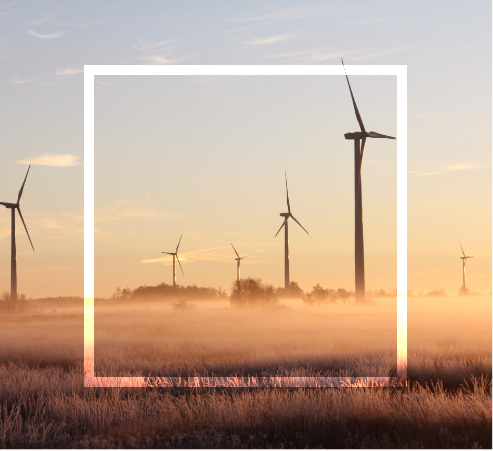 In 2021, EDPR NA initiated its first repowering construction proceedings at the Blue Canyon II Wind Farm in Oklahoma, representing a critical step toward extending the longevity and efficiency of EDP Renewables’ projects in its growing North American footprint. The repowering of Blue Canyon II, which is located in Caddo and Kiowa counties and is part of a four-phase project, ensures significant economic benefits and affordable energy will continue with the project.
EDPR NA anticipated the repowering operation will create an annual increase of more than 30 percent in power production and will extend the project's life an additional 20 to 30 years beyond the 15-plus years it has already been in operation. Seventy-three of Blue Canyon II's 84 turbines will be repowered, replacing the nacelles, blades, and the top tower section of each turbine. Repowering is anticipated to be completed by the end of 2021.

EDPR positions itself at the forefront of innovations in the renewable energy industry. 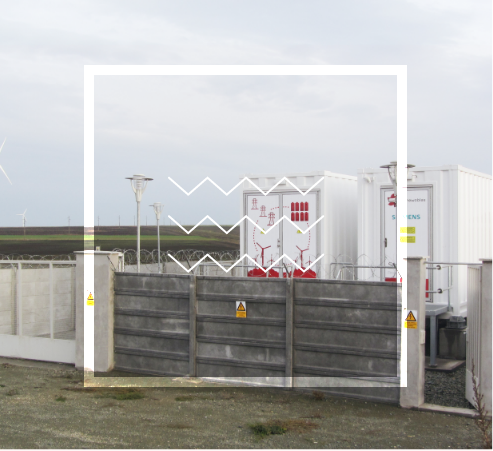 In 2018, EDPR opened a battery energy storage facility at the Cobadin wind farm in the Dobrogea region of Romania. The Stocare Project, as the initiative is called, is a significant step forward in the technological development of energy storage. 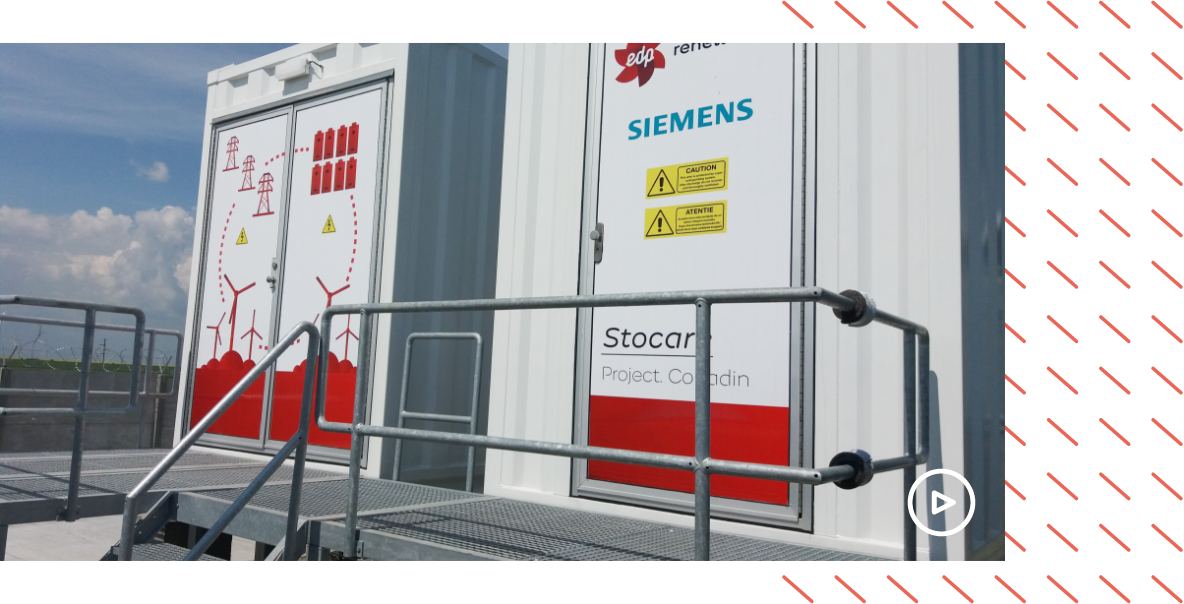 Batteries are charged during days of excess wind energy production, and, when production is lower than expected, this stored energy is supplied to consumers. This reduces forecast errors from the power schedule submitted the day before, helping to minimize energy losses and cut balancing costs. The project is the first in Romania to use lithium ion batteries for electricity storage, and could lead to a breakthrough in the energy market in the coming years. by transforming renewable energies such as wind and photovoltaic solar into consistently available energy sources, these sources become even more efficient, reliable and attractive.

In 2019, EDPR closed its first PPA with operative storage system. The Sonrisa Park has secured a PPA for 200 MW of solar energy and 40 MW of energy storage, with the combination of solar and storage designed to increase effiency and provide greater balance in energy supply.

The project is located in the state of California (USA) and is expected to enter operating in 2022.

Increased energy storage capacity can lead to cost savings on both sides of the meter:

Energy storage can improve the overall efficiency of the grid through reduced cycling and changes in output, resulting in lower emissions.

Energy storage is needed on an industrial or grid scale for three main reasons:

The first is to "balance load" – to shift energy production into the future, often by several hours – so that more existing generating capacity is used efficiently.

The second reason is to "bridge" power – in other words, to ensure there is no break in service during the seconds-to-minutes required to switch from one power generation source to another.

Energy storage also provides power quality management, or the control of voltage and frequency to avoid damaging sensitive equipment. This is an increasing concern that storage can alleviate whenever needed, for a few seconds or less, many times each day.

The Blade Lifter transport system: technology and innovation at the Carondio Wind Farm. 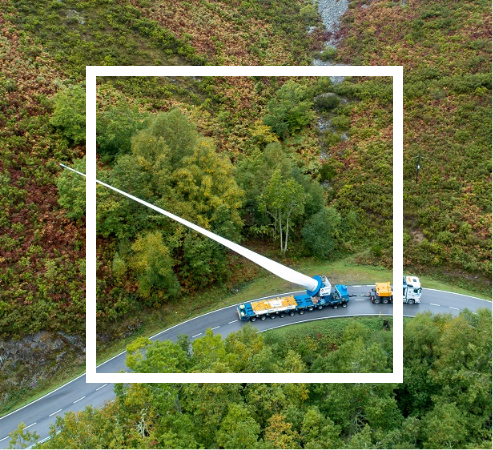 The wind farm's location prevents quick and efficient transport, increasing the need to have a high stock of blades available at Carondio in order to optimize management. With these obstacles in mint, EDPR began to consider different options for blade transportation, including the Blade Lifter technique.

This method consists of transporting each blade on a special vehicle which can incline up to 60 degrees. By being able to scale the steepest sections of the road up the mountain, this uniquely designed machinery allows the blade's angle to be increased and decreased accordingly, which consequently reduces its turn radius. 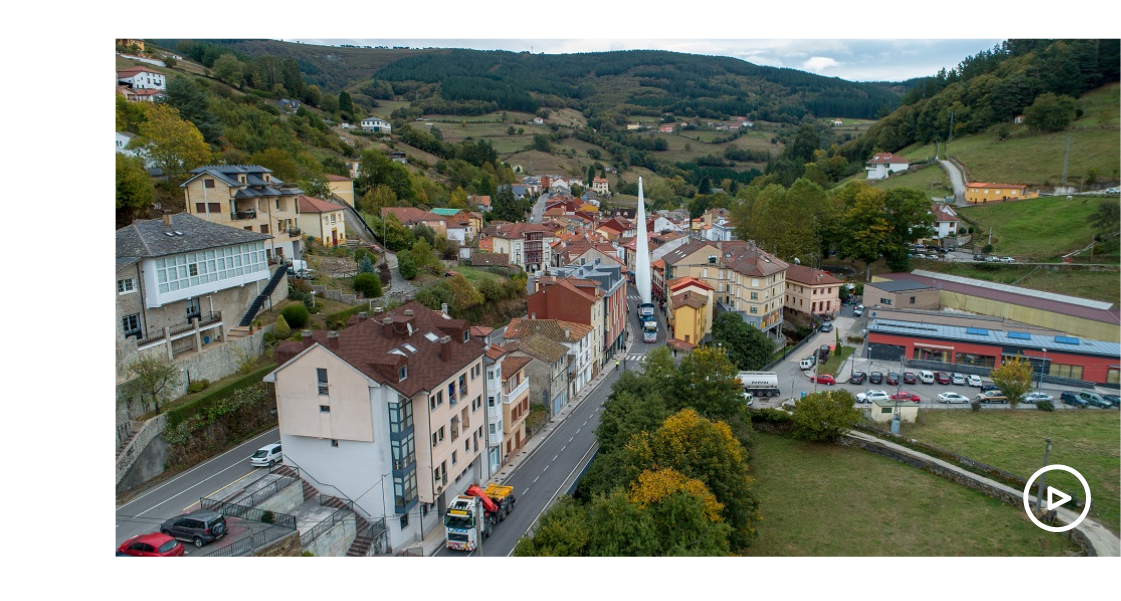 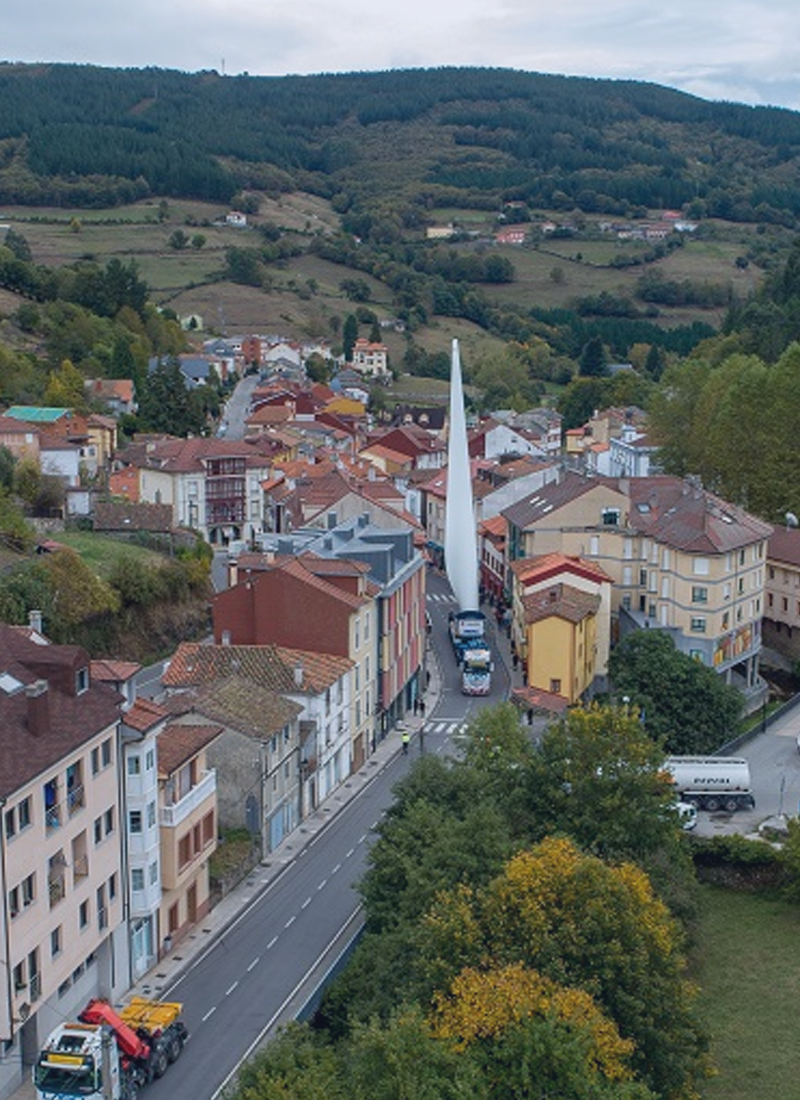 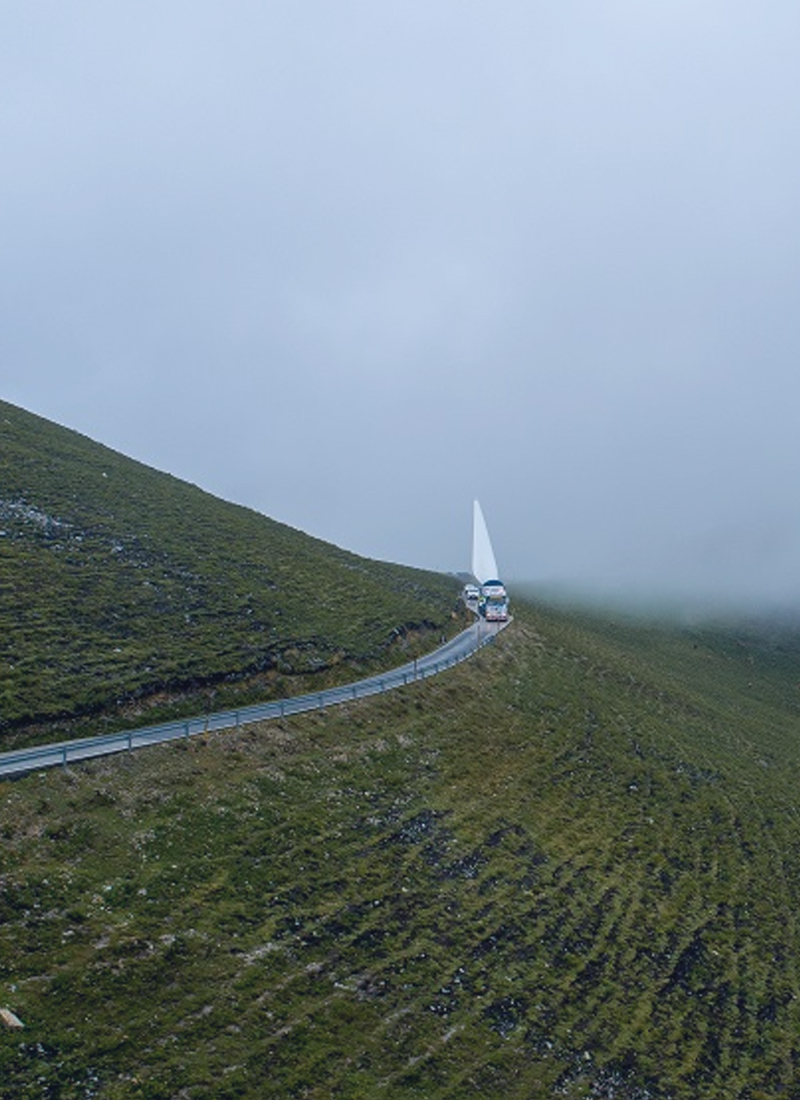 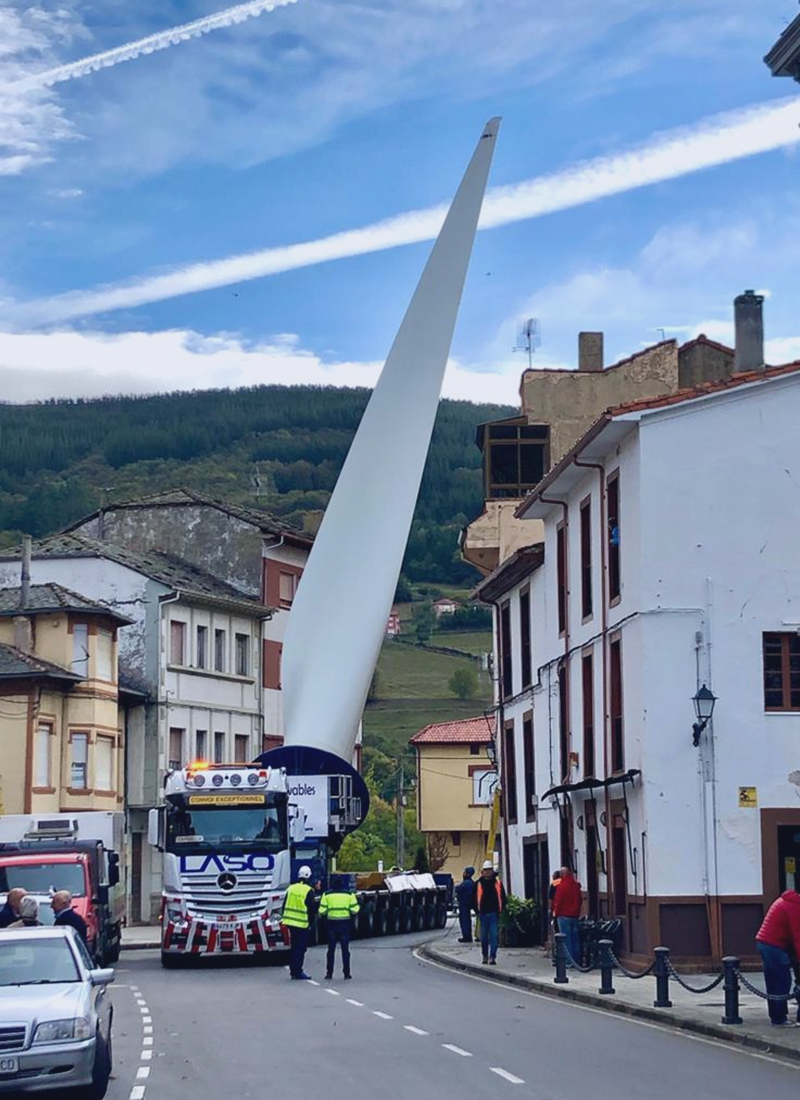 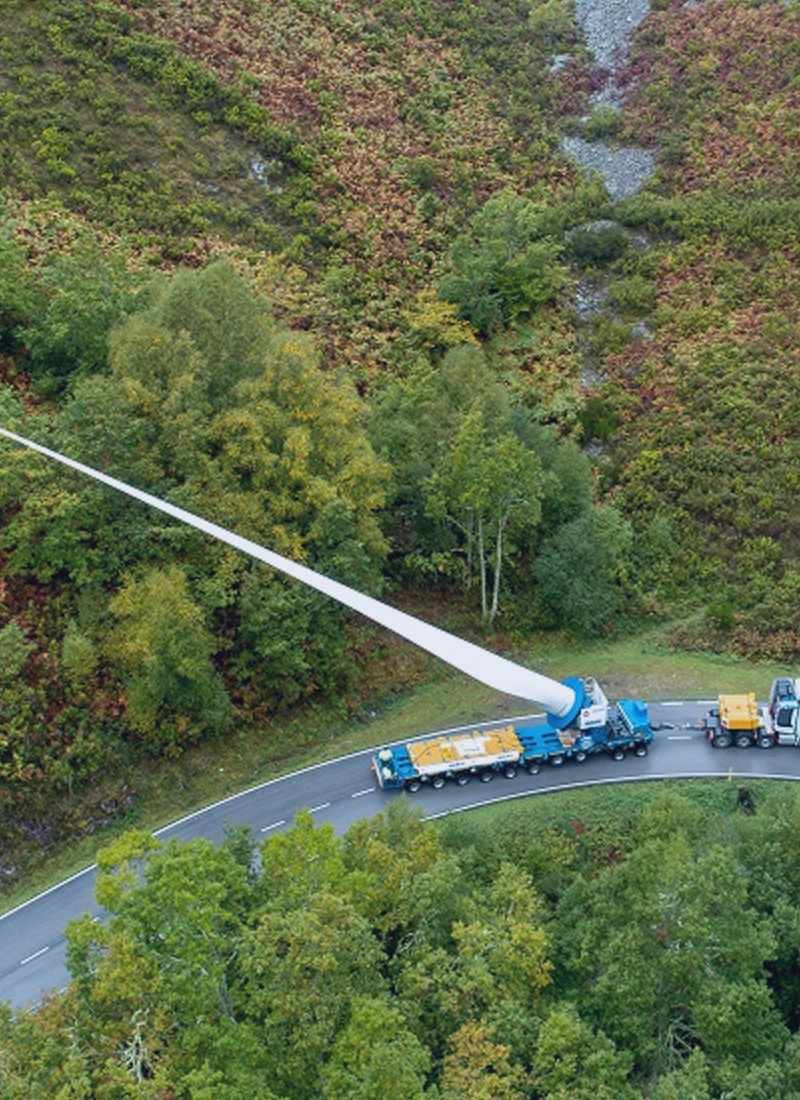 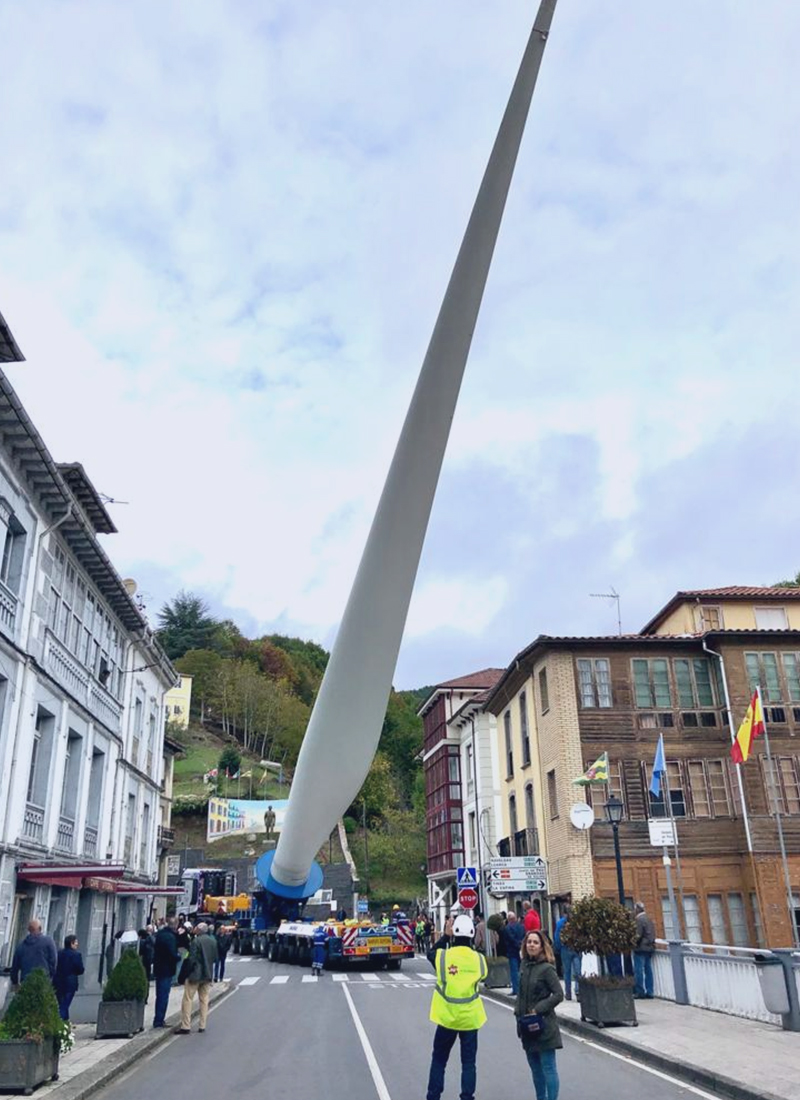 Green hydrogen is gaining relevance on the European scene and the European Commission annouced its strategy in 2020, which sets more ambitious targets for this energy and, in parallel, alliances are being established to lead the implementation. Portugal and Spain have a prominent position and believe that hydrogen business can help achieve: 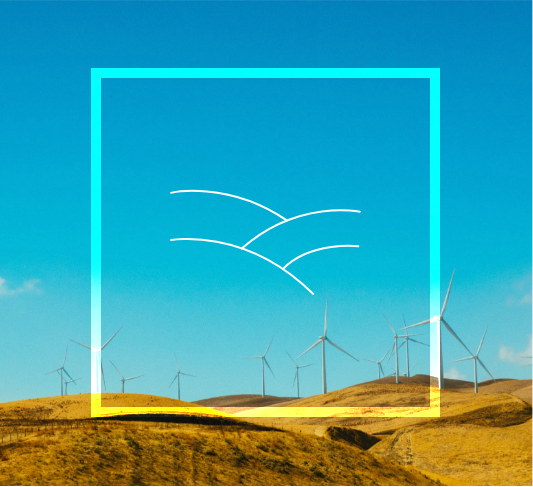 EDPR participated in some initiatives and projects of green hydrogen in 2020, including onshore and offshore systems to evaluate its potential, and it will continue studying what is the best approach of the organization and the right time to consolidate to bet on this promising solution of green energy production. 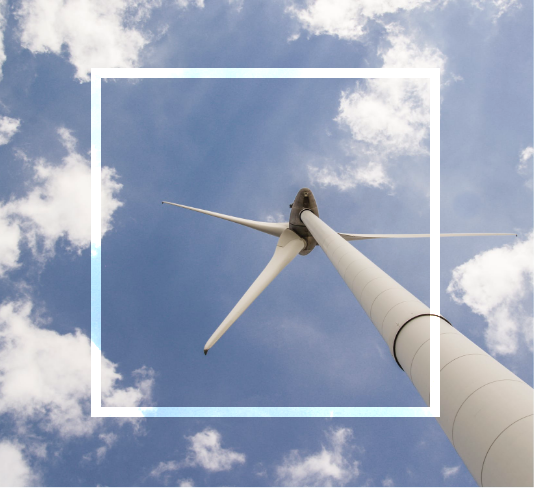 The EDP Group strengthened its commitment to decarbonization by launching one unit that will exploit the potential of green hydrogen.
The H2 Business Unit (H2BU) is the Group's new arm for the development of green hydrogen projects.
H2BU will focus its opportunity development efforts for green hydrogen in promising sectors such as the industries of steel, chemistry, refineries and cements, as well as long-haul heavy transports. Priority markets will be the United States and Europe, leveraging the existing renewable and active pipeline and complementing the decarbonization solutions that the Group offers to its customers.
Strengthening ambition on an already walked upon path

EDP has a pilot project in the Ribatejo Central, the partnership in H2Sines and a collaboration with Alenquer City Council, among other entities. At an international level, EDP is developing the Behyond project, a partnership between Portugal and Norway to study the feasibility offshore hydrogen production and is also involved in creating an European hydrogen market with European Alliance Clean.

Hybrid power plants combine various sources of power generation and energy storage to accentuate the positive aspects and address the challenges of a specific generation type, in order to produce power that is more affordable, reliable and sustainable. The combination of wind and PV offers increased capacity factor and annual generation. 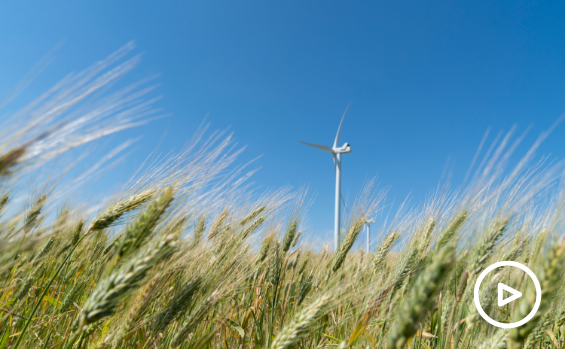 By sharing the same grid connection and substation, hybrid power plants lead to savings in CAPEX and permitting times, compared to developing separate wind or solar farms. Also, teh overall development and the regular O&M costs will be lower (compared to wind and solar plants located separately) given that both plants are located in a single site or in close proximity. 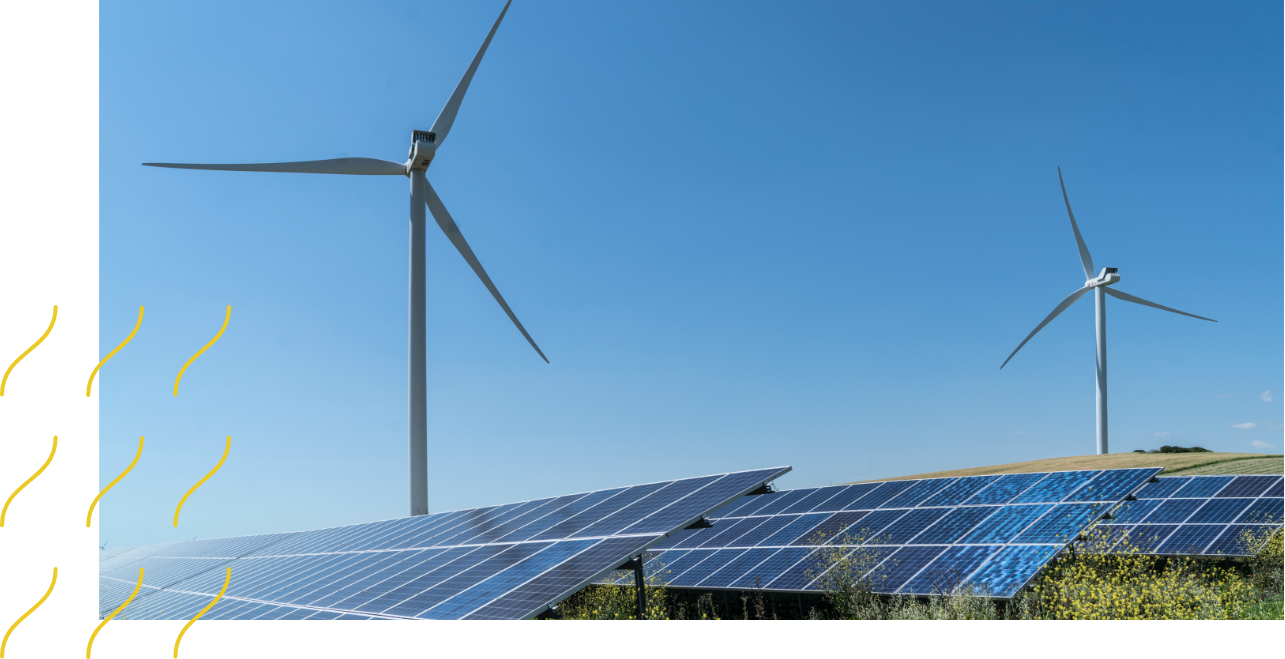 Less variability through storage and combination of complementary energy sources (like wind and solar), serving as baseload power.