Recent searches
Gender roles are a fact. According to the World Economic Forum, the labour market needs 136 more years to close the gender gap worldwide. Although we have come a long way as a society, with many jobs already announced without gender and with a significant increase in the number of women in roles traditionally performed by men, we must continue our efforts to make it clear that there are no "women's professions" or "men's professions." And this #REBELSFORCHANGE campaign is an example of it.

With the aim of breaking down prejudices, EDPR has subjected a group of children to a social experiment. In a neutral space, they were asked to order objects and work tools, such as a microscope, a soccer ball, a hair dryer, or a helmet, according to whether they considered them more appropriate for a woman, a man or both.


How do you think they have placed them?

These are Rocio's and Alba's stories, but there are many.

Our goal at #REBELSFORCHANGE is to promote STEM female professionals who may serve as role models for the next generation.
Increasing women's presence and diversity is key for developing a socially responsible future.

They are women who set aside gender stereotypes and motivate change. They are the 35% of women in the world who decide to study a career in Science, Technology, Engineering or Mathematics (known as STEM, for its acronym), and whom by doing so, become the reference points, the influencers of a whole new generation. They are all those that are committed to developing projects to achieve more sustainable methods of living.

Multiple studies show that the lack of female role models will cause many girls to give up on their dreams, or even not aspiring to a successful career.

This lack of role models is particularly evident in areas such as engineering, management or technology.

of women in tech roles end up quitting their jobs.

STEM workers are female.
We want to inform and show with real experiences what they can do and be. Only in that way they will be able to decide who they want to be when they grow up: with arguments and case studies.

We also want to be here for those with a STEM background who are eager to join a company that listens to them and makes them grow. 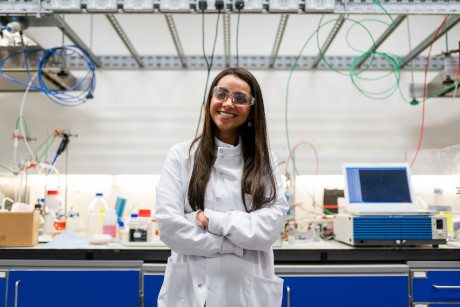 #REBELSFORCHANGE´s movement is here to stay

Click on the images and learn more about the stories and opinions of digital influencers such as Freeda, La Gata de Schrondinger, Deborah Ciencia, Lady Science and La Hiperactina.

No matter how big a company is, it needs talent to develop never-before-seen projects and processes that respond to current and future paradigms.

And talent only comes with a great teamwork. A diverse and equal team. So, if you feel that these lines represent you, if you want to be part of EDPR's #REBELSFORCHANGE: fill in your details and leave us your CV.

In 2021, EDPR was included in this Index for being one of the 380 companies most committed to gender equality in the world.
Read more
In 2022 EDPR revalidated Top Employer tittle in Europe for fourth consecutive year and was named “Top Workplace” in North America in 2021.
Read more
EDPR joins the "Empowering Women's Talent" program for the development of female talent promoted by Equipos & Talento. This program helps companies to learn, share, communicate and inspire about gender diversity and thus become a source of inspiration for others.
Read more

We are taking on this role... to Change Tomorrow Now!

At EDPR we define ourselves as a socially responsible company. We understand diversity as an enabler, differentiator, and key factor to achieve innovation. This is, in fact, one of the fundamental values of the group's strategy, both to achieve all objectives and to attract, develop and retain different profiles.

We work to promote diverse models within EDPR, but we also want society to reflect and promote a change that makes diversity a reality. But before we can achieve this change in society, we must start reflecting from each one of us, in our daily lives. Are you ready to change the world with us?